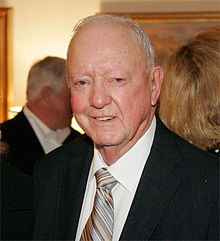 Born in Florida, November 20, 1922, Clark Hulings was raised in Westfield, N.J. Over his lifetime, he resided in New York, Louisiana, and throughout Europe before settling in Santa Fe, New Mexico, in 1972.

His art training began as a teenager with Sigismund Ivanowsky and the famed draftsman George Bridgman and continued at The Art Students League with Frank Reilly. With a degree in physics from Haverford College, Pa., Hulings pursued an initial career as a portraitist in Louisiana, followed by freelance illustration in New York, notably paperback book covers, during the 1950s.

By the early 1960s, Hulings devoted himself to easel paintings. In 1965 he debuted in New York, N.Y., at The Grand Central Art Galleries. In 1973 he was the first recipient of the Prix de West Award at the National Academy of Western Art and in 1976 he was the subject of a solo exhibition at the National Cowboy and Western Heritage Center, Oklahoma City, Ok., that was documented in the book Hulings—A Collection of Oil Paintings (Lowell Press), followed in 1978 by a retrospective at the Museum of the Southwest, Midland, Texas, and a 1981 exhibition at the C.M. Russell Museum, Great Falls, Montana.

As one of the leading American realist painters, Hulings traveled the world looking for rural and urban landscapes and genre scenes that became the subjects of paintings reflecting the vibrancy of the human spirit. Admired for his genius in manipulating the formal elements, he searched for beauty in places where others might only find misery: In the world of street people he saw compassion and self-respect. In urban alleyways he envisioned sunlit corridors of family activity. Among rustic farmers he discovered people whose lives were synchronized with cycles of the seasons and the animals they care for.

Hulings' ability to see timeless beauty in momentary human gestures and activities won him the appellation "master" on numerous occasions. His celebration of textures as expressed through light, shadow, and atmosphere was explained as "describing air itself." His modesty in the face of such acclaim was legendary. Throughout his career he maintained a personal profile far lower than his national acclaim.

Hulings' subject matter was gathered throughout North America and Europe, notably France, Italy, and Spain, where he lived as a child and frequently visited as an adult. Among his signature subjects are complex Mexican and European market scenes that include panoplies of colors, surfaces, and shapes. His affection for donkeys was a trademark, with the animal's quiet demeanors becoming a metaphor of human patience and perseverance.

In 1986, Hulings authored the book A Gallery of Paintings by Clark Hulings (White Burro Publishing). The book was updated and reissued in soft cover in 2006. His paintings have been included in countless articles and surveys such as The Majesty of the Grand Canyon: 150 Years of Art (Pomegranate Press) and Landscapes of New Mexico: Paintings of the Land of Enchantment (Fresco Fine Art Publishing).

Hulings was the recipient of numerous awards from organizations including The Allied Artists of America, The Salmagundi Club and The Hudson Valley Art Association. In 1973 he received the Prix de West Award from the National Cowboy and Western Heritage Museum, where his painting Grand Canyon, Kaibab Trail is in the permanent collection. In his adopted state, Hulings was recognized with his first one-man show in 1945 at the New Mexico Museum of Art, Santa Fe. In 1985, the museum installed a Hulings plaque on its artist walk of fame; and in 2004, he received the New Mexico Governor's Award for Excellence in the Arts.