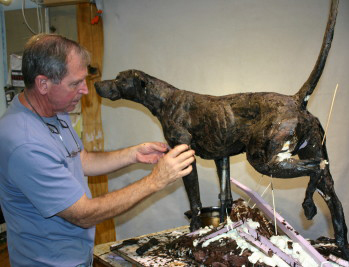 Degreed in Biology and Art Design from Williams College in Massachusetts, Walter Matia attained much training during a long apprenticeship in the Exhibits Department of the Cleveland Museum of Natural History. After leaving the museum, Matia worked for eleven years with the Nature Conservancy, a national non-profit organization dedicated to the preservation of endangered species and unique habitats.

Matia began casting his sculpture in 1980. Initially concentrating on bird life, he has since worked on sporting dogs and other mammals. His works have been exhibited in one-man shows at the Cleveland Museum of Natural History and the Southern Alleghenies Museum of Art. In 1996, he was elected as a Professional Member of the National Sculpture Society.

Matia's works have been selected for the prestigious Leigh Yawkey Woodson, “Birds in Art” exhibitions. Numerous outdoor commissions are attributed to Matia, most notably the Merrill Lynch bull, which is featured outside the company's regional offices. A Walter Matia fountain resides in the formal garden of the United States Presiden'ts Guest House.